The human brain is programmed to want instant feedback. As our bodies perform an action, our brains make connections and build muscle memory based on what happens immediately after. Imagine trying to get your baseball swing down if you had to swing and then use binoculars to see if you actually hit the ball. Without the instant feedback of seeing the bat hit the ball, feeling the impact, and hearing the sound as the bat and ball make contact, it would be far more difficult for you to figure out what the "right" swing feels like. The same is true with target shooting. It's why as a kid with a BB gun, you got bored of shooting the paper target and started shooting at the clothes pin holding the paper target. It was so much more satisfying to see and hear something react when you shot accurately.

This concept is the underlying theory behind steel targets. For every shot that is on target, you get instant feedback from seeing the target react and hearing that satisfying "clang" as the bullet makes impact. Whether you're shooting long range with a rifle or just a few yards away with a handgun, this allows your brain to make a connection between the exact muscle movements you made and the reward of positive feedback. Correct form that results in an accurate shot will be reinforced and become ingrained as habit.

While steel targets are a fantastic training tool, they add a level of safety considerations beyond traditional target shooting. Rather than the bullet passing completely through your target and then having its energy dissipated as it lodges in a backstop of some sort, steel targets redirect a bullet's energy on impact. Therefore, you have to consider what is behind the target as well as what could potentially be hit in the area the bullet is being redirected to. If that redirection is improper or inconsistent, it can pose a significant risk.

The risk of steel target shooting (in regard to the steel target itself) essentially comes down to two basic principles: steel hardness and target design. 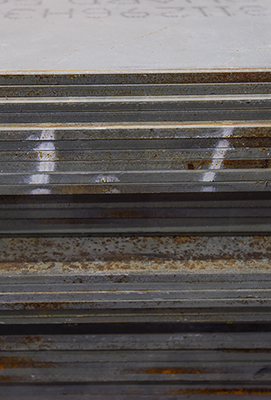 To better understand steel hardness, let’s take a minute to talk about how the hardness of metals is determined. A Swedish engineer named Johan August Brinell created a hardness test that is the standard used today. The Brinell hardness test is conducted by pressing a metal ball (usually made of tungsten carbide) of known diameter and hardness into a metal plate with a standard applied force. The Brinell Hardness Number (BHN) is calculated from the diameter of the indentation created in the metal being tested. The smaller the indentation, the harder the metal.

Brinell hardness numbers can range from 5 (lead) to as high as 4,600 (rhenium diboride). Your average mild steel has a BHN of about 120.  Plow steel and boiler plate (both generic terms for high carbon steel) generally have a max BHN of 200. Compare that to the through hardened armor steel Action Target uses which either has a BHN of 500 (handgun grade) or 550 (rifle grade). These steels are designated as AR500 or AR550 (AR standing for Abrasion Resistant).

When a bullet strikes a completely flat armor steel target, it shatters with the fragments coming off the face of the target in a radial pattern at a predictable angle between 0 and 20 degrees. When a bullet strikes a target made of soft steel, the steel may deform and flex causing most if not all of the bullet to fly off the target face at an unpredictable angle. This results in a target that shoots back.

What's in the design?

When making a steel target, there is far more to consider than just what type of steel it’s made of. The hardness of the steel is an important starting point, of course, but a poor design can turn even the highest quality armor steel into a very dangerous shooting accessory.

To illustrate these points, we conducted a number of tests with various ammunition types and steel target designs in front of a high speed camera. This first video shows a .45 caliber handgun round hitting an Action Target PT Static steel target.

This test and others show that when a bullet shatters on a hard flat surface, the fragments spread in a radial pattern within 20 degrees of the target face. The downward angle of the target (15 degrees in this case) aids in dissipating some of the bullet’s energy by spreading the impact out over a wider area and also directs the majority of the splatter down toward the feet of the target.

This second video shows the same angle as the target is shot with a .223 caliber rifle round. Even with the increased velocity, the end results are exactly the same. The bullet shatters completely and spreads in a radial pattern. Paint chips can be seen floating off the front and back of the target at the end of the clip.

After shooting on one of these targets for a while, you would see a perfect line in the dirt at the feet of the target from the splatter predictably and consistently coming off the target face at the same angle.

The Dangers of Mild Steel

On the opposite end of the spectrum, there’s the school of thought that says, “Just grab whatever steel you can find at the junk yard, and it will work just fine as a target.” While many believe that steel is steel, there is actually a huge difference between the scrap steel you find at your local salvage yard and ballistically safe armor steel used in steel targets.

In this next video, we learned the hard way that it is never a good idea to shoot at mild steel. Several years ago, the US Army came to Action Target with questions about the ballistic properties of various kinds of steel. At the time, we were building ballistic shoot house complexes for the military, and naturally, they wondered if they could get away with using cheaper materials instead of expensive AR500 armor steel. We conducted the following experiment using a sheet of 1/2″ mild steel and a military rifle firing 7.62x39mm ammunition. The test was conducted at close range behind a barricade to simulate shoot house conditions.

In the video, the bullet can be seen completely penetrating the steel leaving a clean hole where the target sticker had been. However, not all of the bullet passes through the hole. The jacket is stripped off and appears to travel directly back toward the shooter at nearly half the original speed of the bullet.

This is an extreme example as far as safety is concerned, but it provides an important lesson in regard to using soft steel as a shooting target. Non-armor steel (defined here as anything less than AR400) deforms and flexes when shot causing an elastic reaction which can deflect bullet fragments in unpredictable directions. It’s also easily pitted and cratered which ruins the uniformity of the shooting surface, and as shown in this example, it can strip the jacket off a bullet as it passes through.

Many steel targets on the market today are designed with exposed brackets, bolt heads, and clamps. The reasoning behind this is that it allows the target head to be reversed for extended life and even wear and tear on both sides of the target. The unintended consequence, however, is that it creates an uneven shooting surface that affects the predictability of the bullet splatter increasing the likelihood that bullet fragments will come back at the shooter. Instead of a radial pattern that comes off the target face from 0 to 20 degrees like we saw in the first two clips using Action Target steel targets, a direct hit on a bolt head or bracket or even secondary splatter can deflect fragments in any number of directions.

In this example, a .40 caliber bullet was fired directly at the bottom clamp of a steel target. Watch closely as bullet fragments scatter in several directions including back toward the shooter.

Here, a .223 bullet hits the same steel target with exposed clamps in the middle of the shooting surface. The target face is flat and is angled down which is good, but notice what happens when the splatter reaches the edge of the target where the clamps are located. Secondary splatter is created as the fragments are redirected from their safe course toward the feet of the target.

Even more common than clamps are targets that are bolted onto a chain or target stand. In this clip, a 9mm handgun round hits the bottom half of an exposed bolt head sending bullet fragments all over the place.

A bullet doesn’t have to hit the bolt dead on to cause unsafe splatter. Just like the clamp, a bullet can hit the flat part of a target surface and then be redirected by bouncing off the bolt. Watch closely as some of the splatter hits the exposed bolt head and is deflected at a steeper angle.

What Does this Mean for You?

At this point, you may be wondering if your hanging gong target that has an exposed bolt head is going to lead to your early demise. The truth is, accidents involving steel targets that end in serious injury or death are rare (though, they do happen), and the further you are from your target, the less likely it is that you will ever be hit with debris travelling fast enough to do significant damage. The point is, you can greatly reduce the risk of shooting on steel targets (especially at close ranges) by choosing a target that is designed to ensure predictable splatter and is made of the right material.

Here at Action Target, we believe that we make the safest steel targets on the market. Extreme care goes into every product we make to ensure that the you can train well, compete hard, and have fun without having to worry about ricochets and splatter coming back at you. So whether you’re a first-time shooter or an experienced marksman, trust the experts to take care of your steel target needs.